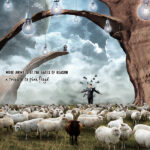 AA. VV. – Various Artists
More Animals at the Gates of Reason – A Tribute to Pink Floyd