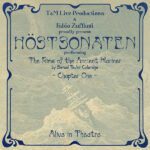 Alive in Theatre: The Rime of the Ancient Mariner - Chapter One

Alive in Theatre: The Rime of the Ancient Mariner – Chapter One

Hostsonaten – Alive in Theatre: The Rime of the Ancient Mariner – Chapter One