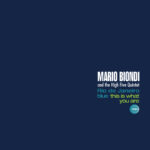 Rio De Janeiro Blue / This Is What You Are

Rio De Janeiro Blue / This Is What You Are

12″ EP single with two songs from Mario Biondi and the High Five Quintet’s “Handful of Soul”.

Add to Wishlist
SKU: SCEP424 Categories: LP, Jazz Tags: Jazzdance, Samba, Vocal Jazz
We use cookies on our website to give you the most relevant experience by remembering your preferences and repeat visits. By clicking “Accept All”, you consent to the use of ALL the cookies. However, you may visit "Cookie Settings" to provide a controlled consent. Leggi di più
Cookie SettingsAccept AllRifiuta tutti
Rivedi il consenso