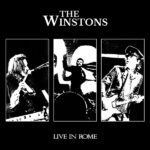 CD/DVD live album for the new Italian psych/prog sensation of 2016!!!