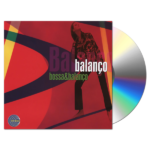 Produced by Nicola Conte, Balanço’s music takes you on a trip through bossa and jazz, soundtracks and songs, and even a fusion between drum n’ bass and easy listening.