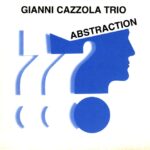 Recorded in November of 1969 in Milan, “Abstraction” is Gianni Cazzola’s first record as a leader. CD reissue.