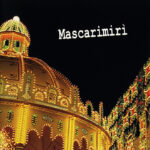 An ancient sound and an ancient canto, but still new and beautiful.