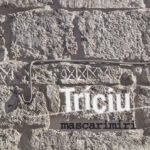 “Tríciu” stands between the Salentine Pizzica and Ragamuffin, a sound broadly spread among the young ones and written precisely for them, as a testimony of this Salentine place and its importance.