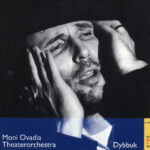 Avantgarde soundtrack to one of the most successful pieces for theatre by Moni Ovadia.