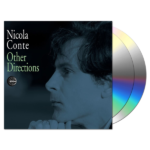 “Other Directions” is a sophisticated production inspired to the jazz era of the late Sixties and revisits in a modern key some sounds from that time. Includes a bonus CD with extra tracks.