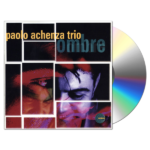 Second album by the Paolo Achenza Trio and the very first one released by Schema.