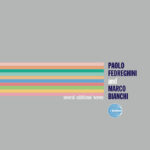 From the hands of the same Fedreghini-Bianchi, writers of “Several People”, here comes the re-worked version of the album that came out in 2005, revisited by the duo itself.