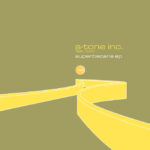 The return of S-Tone Inc. after a long hiatus, anticipating a new album due in Autumn 2017!