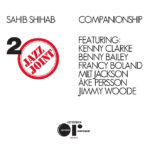 This double album has it all from frantic banging percussive workouts to modal numbers to beautiful ballads! Feat. Milt Jackson among others!!!