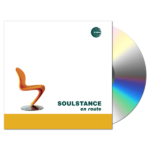 Soulstance is the name of the project by Enzo and Gianni Lo Greco, aka “Lo Greco Brothers”. here we find Jazz, Bossa Nova, Funk, Soul and R&B, a sound who can be listened and can be danced.